Current Status of the Milky Stork Re-introduction Programme in Malaysia and Its Challenges.

This review discussed the current status of the Milky Stork Re-introduction Programme in Malaysia and the challenges it faced. Although it has continued for almost seven years, more challenges appeared as time elapsed mainly due to the arising conflicts between the implementation of conservation policy versus the development projects in Kuala Gula. Hence, the released population is struggling to adapt mainly due to the reduction of suitable habitat for nesting and disturbed foraging areas by the continuous anthropogenic activities. Furthermore, the lack of appropriate training among captive storks prior to being released also slows the adaptation of the birds in their new habitat. The increasing pattern of pollution in the area is also highlighted. Several suggestions were given to help improve the current re-introduction programme. These include improvements to the captive training method, improvement of the existing enclosure’s condition and environment, protection of remaining mangrove forest, creation of a buffer zone to mitigate the increasing pollution level in the area, close monitoring of the released population, and maintaining continuous support and awareness among the public. Considering the ongoing anthropogenic activities that may impair the status of Kuala Gula as an important bird sanctuary, emphasis should be given to achieve sustainable development throughout the area.

Current Status of the Milky Stork Captive Breeding Program in Zoo Negara and its Importance to the Stork Population in Malaysia. 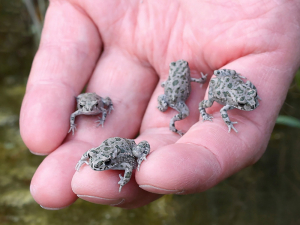 Translocation of a top-order carnivore: tracking the initial survival, spatial movement, home-range establishment and habitat use of Tasmanian devils on Maria Island.

The Tasmanian devil (Sarcophilus harrisii) is a carnivorous marsupial threatened with extinction from the emergence of Devil Facial Tumour Disease. The establishment of ex situ populations is a key management action for the species. We examined the initial survival, movement pattern, home range, and habit use of six devils from a total of 15 individuals translocated to Maria Island (south-east Tasmania). A total of 14 devils (93%) survived the initial monitoring phase within this study (122 days after translocation). The maximum and minimum distance recorded during one night was 21.73 km (range = 14.12–25.40 km) and 1.94 km (range = 0.07–7.71 km), respectively, while the average nightly distance travelled varied significantly (range = 7.24–13.07 km) between individuals. Short-term home-range size (90% kernel) varied from 936 to 3501 ha, with an average of 2180 (±836) ha for all devils. The habitat preference of devils on Maria Island shows a positive association with agricultural and urban habitats, and an avoidance of wet eucalypt forest. The home range and habitat associations may change as competitive pressures increase with population growth; however, this initial research indicates that translocation as a management action is a powerful tool for the establishment of ex situ populations, assisting in the continued conservation of this species.

Fourth year of Partula species reintroductions into natural habitat on Tahiti and Moorea.

The Partula tree snail reintroduction programme is almost unprecendented in the world of conservation in terms of the number of species extinct in the wild being repatriated to their ancestral home. After four years of reintroductions onto three of the four Society Islands where all 12 of the released taxa originated, the rapid dispersal and very low mortality rate on Tahiti and Moorea has transcended expectations. However, the failure on Raiatea due to predation by the New Guinea flatworm Platydemus manokwari highlights the need for constant vigilance. The first in a series of surveys on Raiatea and Huahine into the status of P. manokwari on those islands took place in 2018 and will continue early in 2019 in preparation for releases later in the year. Reintroduction in itself does not guarantee reestablishment but early results certainly give hope.

This conservation progress has only been possible because of the long-term collaboration between the French Polynesian environmental agencies and the international zoo community together with IUCN’s SSC Conservation Planning, Mollusc and Reintroduction Specialist Groups, with additional funding support from the Mohamed bin Zayed Species Conservation Fund.

"Extinct in the wild" 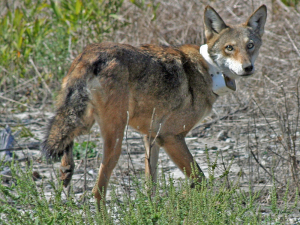 The Mexican gray wolf (Canis lupus baileyi) is the southernmost occurring, rarest, and most genetically distinct subspecies of gray wolf in North America. It once occurred in the mountainous regions of the Southwest from central Mexico throughout portions of southern Arizona, New Mexico, and Texas.  Aggressive predator control programs nearly eliminated the Mexican wolf or ìloboî as it is referred to in Spanish.  In 1980 a captive-breeding program began that saved the Mexican wolf from extinction.  Management of the captive population became part of the American Zoo and Aquarium Association Species Survival Plan program in 1994.  The captive population currently numbers about 200 animals, which are managed by over 40 zoos and wildlife sanctuaries throughout the United States and Mexico.

Recovery efforts for the Mexican wolf began when it was listed as endangered in 1976. The current Mexican Wolf Recovery Plan, approved in 1982 by the U.S. Fish and Wildlife Service and the Direccion General de la Fauna Silvestre in Mexico, calls for maintenance of a captive population and re-establishment of a wild population of at least 100 wolves over 5,000 square miles of historic range.  In March 1997, the Secretary of the U.S. Department of the Interior approved a plan to restore Mexican wolves to a portion of its historic range in Arizona and New Mexico.  The final environmental impact statement was completed in December 1996 after 14 public meetings, three formal public hearings, and analysis of over 18,000 comments from other agencies, organizations, and citizens.

In March 1998 the U.S. Fish and Wildlife Service (Service) and its cooperators at that time, Arizona Game and Fish Department, and USDA Wildlife Services, released three family groups consisting of 11 Mexican wolves into the ìprimary recovery zoneî on public lands in Arizona. Wolves have been released each year following this and current plans are to continue releases through 2002 or until natural reproduction sustains the population.  Currently, reintroduced wolves are allowed to disperse into the secondary recovery zone in Arizona and New Mexico or be translocated there from the primary recovery zone if captured for management purposes.  The two zones together constitute what is currently called the ìBlue Range Wolf Recovery Areaî (Figure 1, page 10).

Released wolves and their progeny have been designated as a ìnonessential and experimentalî population under a special provision of the Endangered Species Act.  This designation allows for more flexible management of wolves.  Under this designation the Service writes a special regulation, or management rule, which specifies management guidelines for the wolf population.  For example, the current management rule allows for the taking of wolves under certain circumstances when they are in the act of killing livestock.  Also, wolves are currently not allowed to establish territories outside recovery area boundaries, unless private landowners or tribal governments approve it.  If this permission is not granted or if wolves disperse onto public land outside the recovery area, under the current rule such wolves must be recaptured and relocated back to the recovery area or returned to captivity. Mexican Wolf Reintroduction Program Three-Year Review Workshop

As of August 2001, there are approximately 35 wolves living in the Blue Range Wolf Recovery Area.  These wolves have begun to pair on their own, are killing natural prey like elk and deer, and have begun to reproduce in the wild.  There have been 14 substantiated reports of livestock damage due to wolves and the Defenders of Wildlifeís Wolf Compensation Trust Fund has reimbursed the ranchers involved.